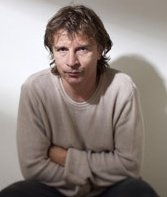 Richard Andrieux is 47. A composer and a singer, he released his first album in 1988. In 1990, he joined the Strasbourg Drama School and began a career in acting. He has had several leading roles, recently playing Clarence in William Shakespeare’s Richard III. In 1993, he took up music again and set up the Tiramisu band. He currently lives in Strasbourg. José is his first novel.