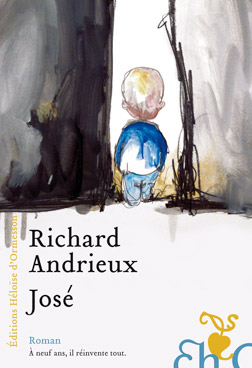 “At every opportunity, he chose to remain alone. At school during the break, he would go and sit down by himself on a bench he called ‘Courage’, then he would close his eyes. He felt fine that way.” José is nine. He is a sensitive child whose father died when he was just a baby. He lives with his Mum and the faithful companions of his imaginary world: a bed he calls “Journey” and a candlestick he has renamed “Colonel”. In his bedroom, he invents his own universe, to which no one has access, not even his mother. Will he escape the spiral of isolation in which he is trapped? The doctor has told his mother not to get too worried, yet she still fears for her son. With great tact and sensitivity, Richard Andrieux explores the world of a child who is very different from others, at a moment in his young life when his connection with the real world is getting dangerously thin. Reminiscent of Howard Buten’s work and of St Exupéry’s fable, José is a poignant story. José was named one of the favorite novels published this fall by the booksellers. It was awarded two literary prizes for first novel and received raving reviews.